One day on the Hittygirls Yahoo group, some mysterious and somewhat anonymous poster left a message from Lemonade,  Baloney and Crow. Members were perplexed,  and called the messages "clues" as they tried to guess what would come next!
Finally it was revealed! They would host a summer event!
They called it the Hittygirls Firefly Regatta and Picnic.
http://www.hittygirls.com/lbc/lbc.html 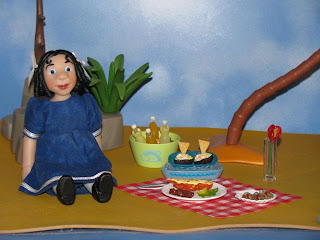 Photo Challenge #2 is for Hitty to have a picnic on an island.
Brilliant! We have an island!
Small pirate skeletons live on it, but hey...
Jose and Jack are on vacation,
so Hitty Jubilee set up her picnic.
I wonder if she will get extra points for the crow? Photo Challenge #1 is for Hitty to participate in the regatta
in some kind of floating craft, decorated for the regatta.
We have a sailboat!
A special sail and banner were crafted,
and off she went to the regatta! 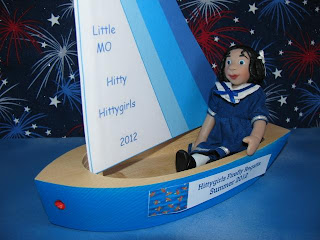