30 Days of My Jubilee Summer

Toward the end of June, I accepted an invitation
to participate in a "30 Days, One Object" photo project
with an Ipernity group.

I counted the days, and realized that if I started the day
we were at the Taos Pueblo and I continued for all 30 days,
the last day of the project would be the day before the students returned
to school. 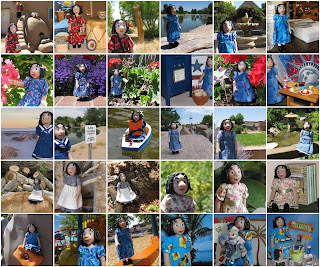 I ended up doing themes in 3 day groups to keep Jubilee
in the same dress for 3 days.

My real opinion?
It did take some consideration each day to come up
with an idea for a photo and actually take it.
There were days I went out to get a good picture,
which was a good thing.
There were days when I was gone all day,
and took Jubilee and my camera with me.
There were days when I wanted to stay home and not think about it,
but I did anyway.
There are pictures I love,
and pictures that are boring.
Then, by the time my vacation had ended,
and I went back to work,
it consumed more energy and creativity
than I was willing to give.

In the future, I'd like to try it again, with an adjustment for time.
Lauren really wants to do an ABC series.
I really don't want to do a one a day photo sequential photo shoot
as it doesn't seem to do much for the quality of some of my photos.
One a day is okay, but in the future,
there will be more time in between photos,
and I'll do them when I have the time, energy and motivation
to contribute good photos to a series.